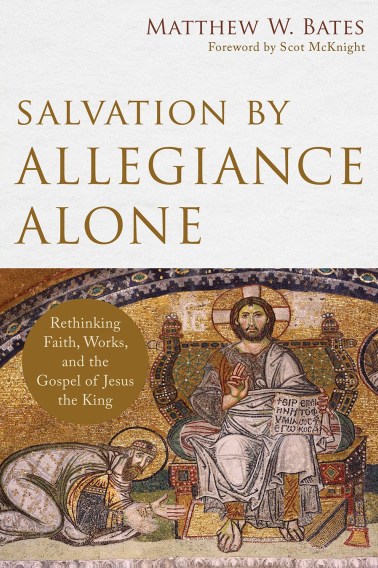 For purchasing, click here or on the bookseller buttons below.

We are saved by faith when we trust that Jesus died for our sins. This is the gospel, or so we are taught. But what is faith? And does this accurately summarize the gospel? Matthew Bates presses the church toward a new precision: we are saved solely by allegiance to Jesus the king. Instead of faith alone, Christians must speak about salvation by allegiance alone. The book includes discussion questions for students, pastors, and church groups and a foreword by Scot McKnight. Published by Baker Academic, 2017. Endorsements: Gary Anderson, Michael Gorman, Michael Bird, Joshua Jipp, and Scot McKnight.

I’ve sought to go beyond the book or to re-express some of its central concepts in written and audio interviews.

There are too many blog reviews floating around on the web to list them all (sorry if I should have included yours and haven’t!), but here are a few of the more scholarly and/or comprehensive reviews.